ICICI Bank- the second-largest private bank has reported a quarterly report of FY 2021, and impressively they have received a 36% annual rise in the profits, as per Sandeep Batra, President of ICICI Bank Ltd.

Before having a glimpse at the ICICI Bank quarterly report, let us understand the meaning of the quarterly reports first. It is a detailed summary of unaudited financial statements.

These statements include the following statements:

Last Saturday (25 July 2020), a meeting was held in Mumbai among the Board of Directors of ICICI Bank Limited in regards to the audited standalone and consolidated accounts of the Bank for the year ended March 31, 2020.

Apart from this, ICICI Bank is offering its hands in this pandemic situation by setting aside a large sum of money.

According to Sandeep Batra, President of ICICI Bank, “Additional Covid-19 provisions of INR 5,550 crore were made on a prudent basis in Q1-2021, with the objective of completely cushioning the balance sheet from the pandemic.”

“We continue to live in uncertain times,” he said. He further added, “From our perspective, we wanted to be prudent and that is the reason why we made this provision.”

Being a Chartered Accountant and a Company Secretary, Sandeep Batra has been working with the ICICI Group for the previous 18 years and is presently the President at the ICICI Bank.

He has been an organizer individual from the ICICI Prudential Life Insurance group and has worked with the association as its CFO from September 2000 till 2006 when he joined ICICI Bank as its gathering consistency official.

ICICI Bank Q1 Results’ 2020 Analysis, as per announcements made by Sandeep Batra

ICICI Bank has undergone a plethora of changes and these changes are positive for the economy since they are customer-friendly.

There are certain key highlights that were reported in the report along with a dramatic increase in the growth. 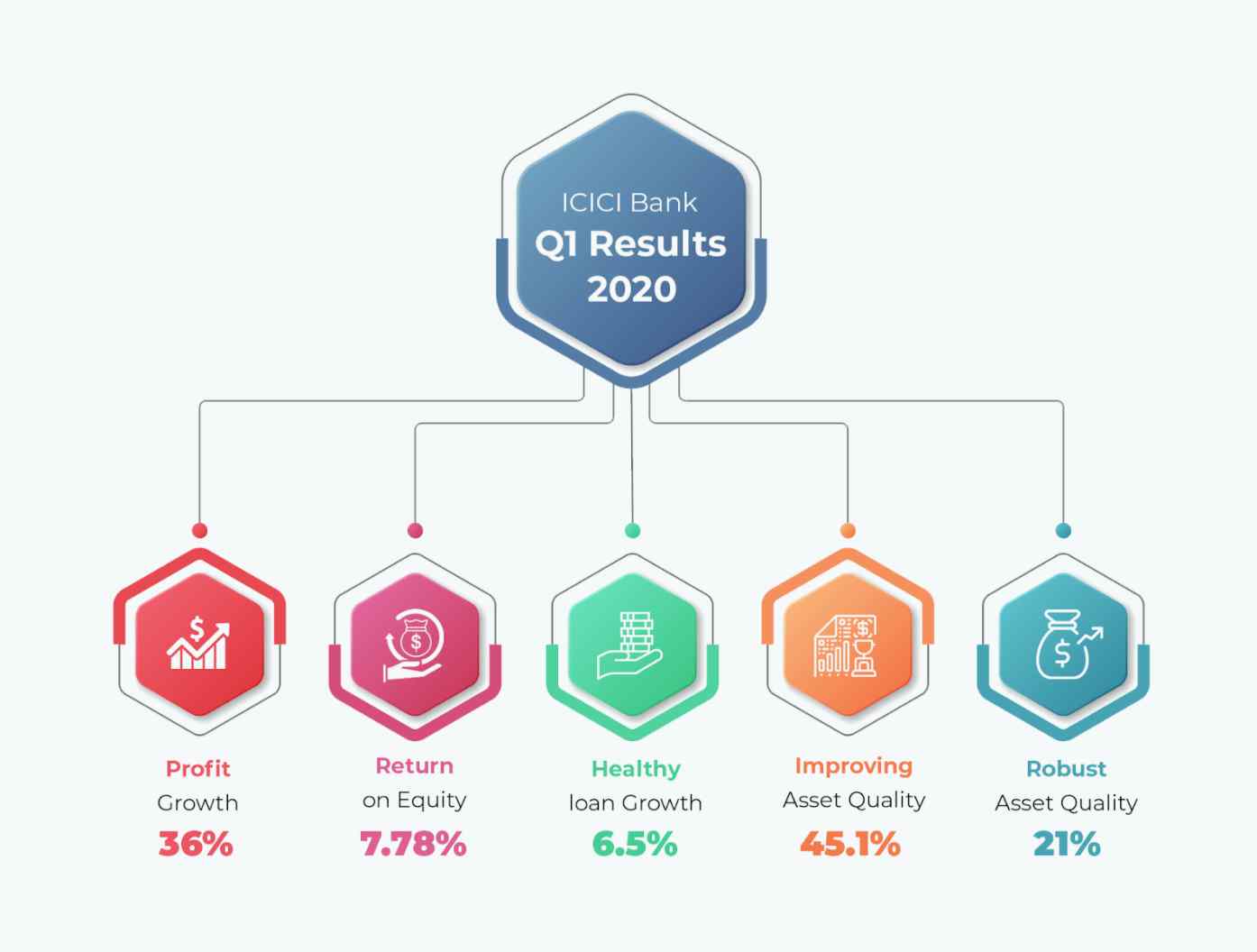 Some of these features are as below:

ICICI Bank has received a growth of 36 percent as compared to its previous year.

The profit is expected to be INR 2,599 crore profit after tax deduction. The core operating profit of the ICICI Bank grew dramatically with a rise of 15 percent in the first quarter of FY 2021.

The net interest margin grew by 3.87 percent and fee income rose by 13 percent.

The bank’s advances developed by a minor 6.5 percent over the earlier year, and the total or absolute advances presently remain at Rs 6,31,215 crore.

Its household loans developed by 9.6 percent over the earlier year, with the retail book developing by 11.3 percent.

The lull in the economy is relied upon to bring about higher augmentations to non-performing credits, increment in arrangements, lower advance development and charge salary“, the bank said in an administrative recording.

During the media concall, Sandeep Batra had highlighted vital improvements in credit growth. ICICI bank noticed a 10% year-on-year growth in domestic credit advances, as of June 30, 2020.

Y-o-Y growth in their retail loan portfolio was at 11% while the performing domestic corporate portfolio saw an increase of over 8%.

Undoubtedly, deposits act as a bread and butter for the banks to expand and flourish in the market. ICICI Bank saw deposits rise by around 21 percent over the previous year to Rs 8,01,622 crore in Q1.

The average current account deposits rise by 20 percent whereas the grew by 14 percent.

ICICI Bank has received a consolidated return on equity of 7.78 percent. The bank’s board has endorsed raising Rs 15,000 crore of value capital during the year, the main such gathering pledges plan since 2007 for the bank.

Here below, you can easily view the profit and loss statement of ICICI Bank in the Q1 2020.

The consolidated results (Quarterly) are shared as below along with details of each segment: 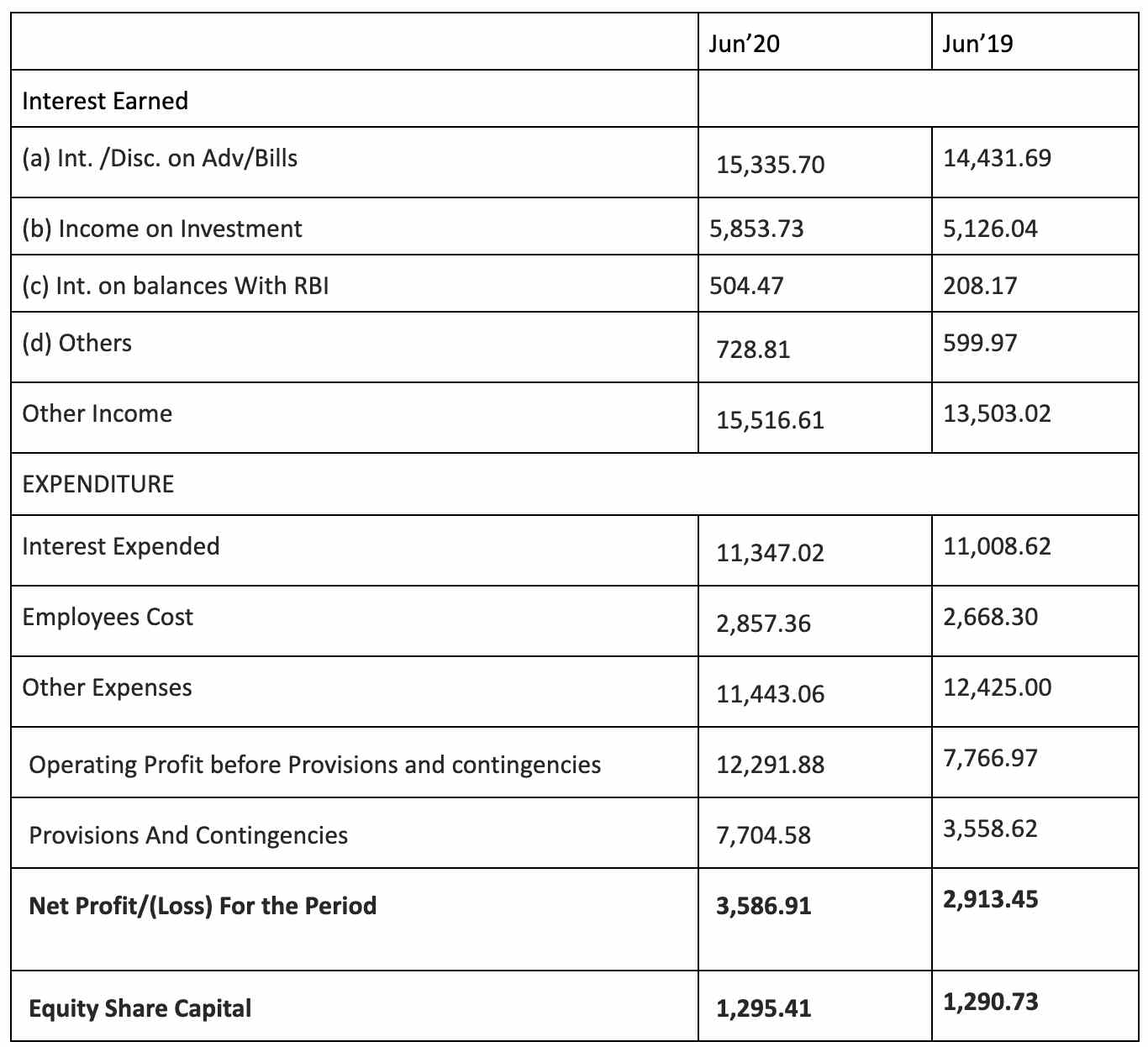 ICICI Bank offers its customers a free net banking platform- iMobile and many offers on credit and debit cards to enhance the customer experience.

This stage offers about 500 administrations to guarantee a continuous financial experience to the retail, business banking, SME and corporate clients.

A significant number of these administrations are first-in-the-business and are accessible quickly on the Bank’s portable financial stages, for example, iMobile and InstaBIZ or the web banking stage.

Private company clients can likewise utilize the APIs from the as of late propelled API Banking Portal to incorporate different instalments and item arrangements. The Bank’s clients can keep banking carefully from a distant area, without visiting a branch or office.

The volume of versatile financial exchanges expanded by 98% year-on-year in Q4-2020.

The volume of exchanges on Unified Payments Interface (UPI) expanded by 161% Y-O-Y in Q4-2020. Advanced channels like web, versatile banking, POS, and others represented over 88% of the investment account exchanges in FY2020. 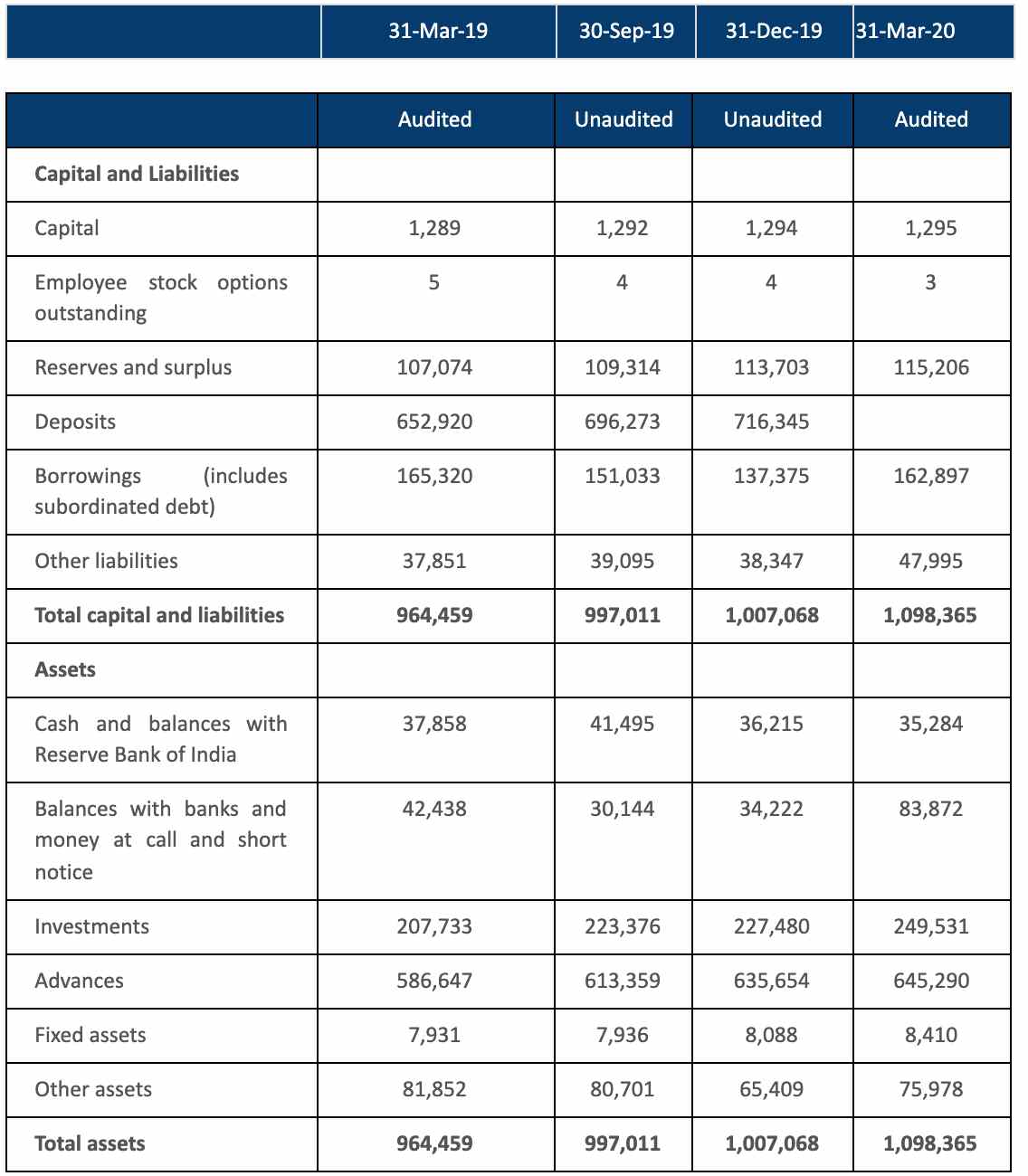 The Bank is utilizing this period to additionally reinforcing its foundation, its capacity to catch showcase potential, and it’s conveyance abilities while upgrading proficiency. ICICI Bank is all around promoted and has a solid store establishment.

The computerized and innovative stages are key qualities of the Bank and the current situation gives a chance to re-engineer the conveyance of banking. 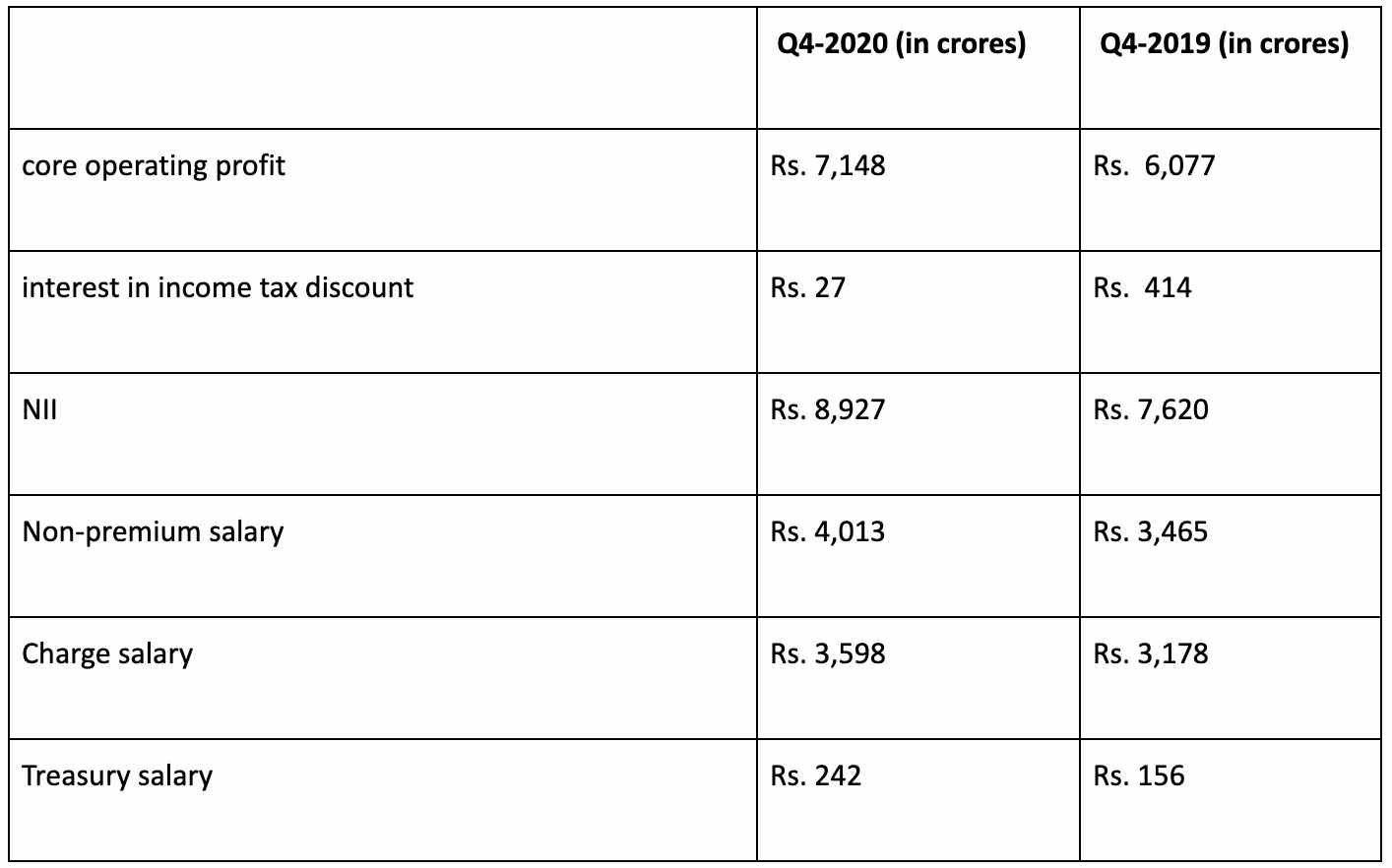 Barring Covid-19 related arrangements, the benefit after duty would have been Rs. 3,260 crore in Q4-2020

The standalone benefit after the expense was Rs.  7,931 crore in FY2020 contrasted with Rs. 3,363 crore in FY2019. The Government of India diminished the duty rate pertinent to corporates in September 2019.

The effect of this change on the assessment cost for FY2020, including both, the one-time extra charge because of the remeasurement of aggregated deferred charge resource at March 31, 2019, and the duty cost at lower rate for FY2020 was Rs. 1,391 center.

Barring the effect of progress in charge rate during the year and the Covid-19 related arrangements, the benefit after assessment would have been Rs. 11,360 crore for FY2020.

Thus, delivering such growth numbers gives a strong positive sentiment for the performance of the stocks.