Bear Put Spread is a type of vertical spread wherein the trader buys a put option hoping to make a profit due to the market decline, and at the same time writes another put option with the same options expiration date but with a lower strike price to balance some of the cost.

Let’s take a step back.

Options trading is quite a complicated and confusing process. Experienced traders prefer trading with option strategies like spreads rather than trading naked options. Although the spreads reduce the overall profitability of the trade, at the same time they also provide better visibility of the risks involved and can protect the trader from high risks.

The new traders, who enter the trading world with the objective of making quick money, may not find the idea of limited profits appealing, however, for seasoned traders the visibility of the risks is more important than making high profits so that they can see where they are placed even if the trades go all in the wrong direction.

One of the important spreads is the Bear Put Spread.

The lower the strike price of the short put, more is the potential maximum profit, but of course, it comes with more risk as well.

It is equivalent to a Bull Call Spread, but it is used when the traders have a moderately bearish forecast for the market and expect the prices to gradually go down. As is true with all the spreads, the gains are limited but so are the losses. 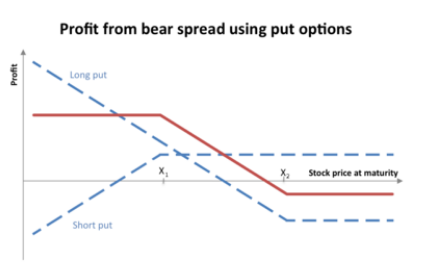 Also, just like the Bull Call Spread, the Bear Put Spread also has a net debit or requires a cash outlay at the beginning.

So, in case you are looking to gear up for the share market trading, and especially for derivatives trading – just fill in the details below.

We will arrange a callback for you to get you started:

You can read this review in Hindi as well.