In a normal scenario, the traders buy or sell the securities that they already own. However, in some cases, a trader may borrow some securities like stocks and sell the borrowed securities. This is called Short Selling. 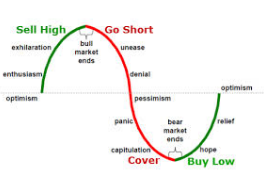 Short Selling is the practice wherein the investor sells the shares that he does not currently own.

The stocks are borrowed from a broker and then sold, in the hope of the prices of the shares going down, so that when the prices go down the investor can buy them at lower prices and return them to the lender.

In this process, the investor is able to make profits due to the difference in the low buying price and the high selling price.

There are two main reasons why an investor would be involved in the short-selling of shares.

Let’s understand this concept with the help of an example:

As we have understood from the above example that the short-selling process is based on speculation, and instead of profits it may result in infinite losses.

At the same time, when a number of investors decide to short sell the shares of a particular company, it has a huge negative impact on the company’s share price and on the whole market in general.

The company and the market get destabilised.

Due to these reasons, short selling is highly regulated and it is illegal to short sell the shares.

In India, in particular, naked short selling is banned as it involves no intent on part of the investor to provide delivery of the shares he sold. The investor must show proofs of borrowing and must honour his obligation of delivering the securities at the time of settlement.

The investors must also disclose up front that the transaction is a short sale at the time of placing an order.

Let’s understand this concept with the help of an example.

So, there is a trader named Rajesh. He placed a short-selling trade for 100 shares of ICICI at a price of INR 750. He expects the price to drop and is looking to make a profit out of this trade.

However, the stock sees a jump due to a quick announcement of its new acquisition of a financial start-up.

The stock touches INR 775, thus, eliminating all potential chances of Rajesh making money from this trade.

Furthermore, the trading account of Rajesh must have an amount in the range of INR 77,500 for the broker to square-off his position. However, there is a shortage of funds in Rajesh’s account.

In such a case, Rajesh is liable to buy the stocks he chose to short anticipating a profit. He has T+2 days to arrange the funds before the delivery of stocks actually happens.

In the meantime, the exchange does not directly deal with individual traders.

It interacts only with the depository participant or DP, which is basically your stockbroker. Thus, SEBI will deduct the money from the broker’s account and transfer the shares to its account.

Rajesh is supposed to pay back to the broker along with requisite interest applicable.

There is another case possible.

Here we talk about Sanjay, another intraday trader. He is on the other side and promised to provide delivery of 100 shares to the buyer.

He also failed to deliver.

This situation is termed as “Short Delivery”.

So, what happens from here?

Well, in such cases, the broker takes part is something called “Auction Market”. This auction happens on T+2 trading day for 45 minutes between 2 pm and 2.45 pm.

During this event, the stock price decided between the following two options:

One of the above is picked up, whichever is higher!

So, when we talk about short selling penalty, these are the different charges that are levied on the trader if he/she fails to deliver (money or shares) while shorting the stocks.

This one is relatively riskier strategy.

The simpler reason for that is, it comes with unlimited risk to your principal trading amount and offers a limited profit on your trade.

If you are looking to use short selling in the options segment, you are supposed to perform a detailed analysis of the potential movement and direction of the stock or index.

When we talk about short selling in the futures segment, the cap of the potential profit from your trades goes out of the window. In other words, unlike short selling options, this segment allows you to have unlimited profit potential.

At the same time, there is no limit to the risk to your trade value either.

If the market price of the futures keeps on decreasing, the profit sees a corresponding increase.

Well, you can’t do this.

That is, short selling in delivery trades is not allowed.

You can do short selling in Intraday trades only (as explained above) and you MUST square off your position before the trading session ends, else your stockbroker will do it for you.

You cannot carry forward your position while short selling your stocks.

Yes, you can certainly short sell in your currency trades.

There is one difference in this segment though, as compared to what we normally do in the equity segment.

Here, you are dealing with a pair of currencies. Thus, in a sense, it implies that if you are going short against a particular currency, you inherently are going long on the other currency in that particular pair.

For instance, you look to go short on INR/USD pair assuming that the Indian Rupee is gonna go (further!) down against its US counterpart.

This will imply that it will require more INR units to buy a single unit of a USD.

Now, since two currencies are involved in this transaction, it makes complete sense that you follow a specific process before deciding to go ahead with a shorting of a currency pair.

Here is what we think:

This may feel a bit exhausting initially but as long as you keep on following these steps, it will invariably become your second nature to follow this process before placing the trade.

When it comes to the time limit, it really depends on the trading segment.

For instance, in the case of the equity segment, you need to exit your position within the same trading session. Like mentioned above, you cannot carry forward your position by any means.

As far as derivative trades are concerned, you have the time limit till the dates of the contract expiry.

Having said that, you can always push forward your expiry by closing the existing one and opening up an equivalent position for the next expiry date.

Whether it is recommended or not, that is a different story.

If you are looking to make more money through short selling, well, the risk level is going to be relatively high too.

Some of the risks of this form of trading include:

If you are not sure which path to follow while performing short selling, you are not going to land at the “Profit Airport”.

Thus, remember to follow a few proven short selling strategies and STICK TO THEM!

Here are those listed for your reference:

There could be other strategies you could employ as well based on your trading experience.

Here are some quick advantages of short selling in your share market trading:

At the same time, you must know the specific concerns related to the concept of short selling:

Therefore, it is to be noticed that short selling is a legal activity if done with good intent.

It allows the investor to hedge his risks and to make profits based on his speculation. However, if short selling is done with unethical intent, it can cause harm to the entire market and all the parties.

It may be used by ruthless elements to crash down the prices of a company, but if used efficiently short selling is a great tool for profits and portfolio risk management.

In case you are looking to get started with your share market trading, then just fill in some basic details in the form below.

A callback will be arranged for you:

If you wish to learn more about stock market education and specifically about stock buying and selling, here are a few references: