Top Stock Market Traders in India aren’t always in the limelight as those big-time investors that often make it to all the front pages in every business newspaper or are called for TV news debates and interviews.

But this doesn’t mean that Stock Market Traders are any less successful or worthy of celebrating as illuminating identities of the share market of India. That’s why we have compiled this list of self-made and eminent stock market traders of India who are regularly trading especially in the Intraday Segment and have a portfolio to admire.

So let’s dive into this list and these inspiring stories. 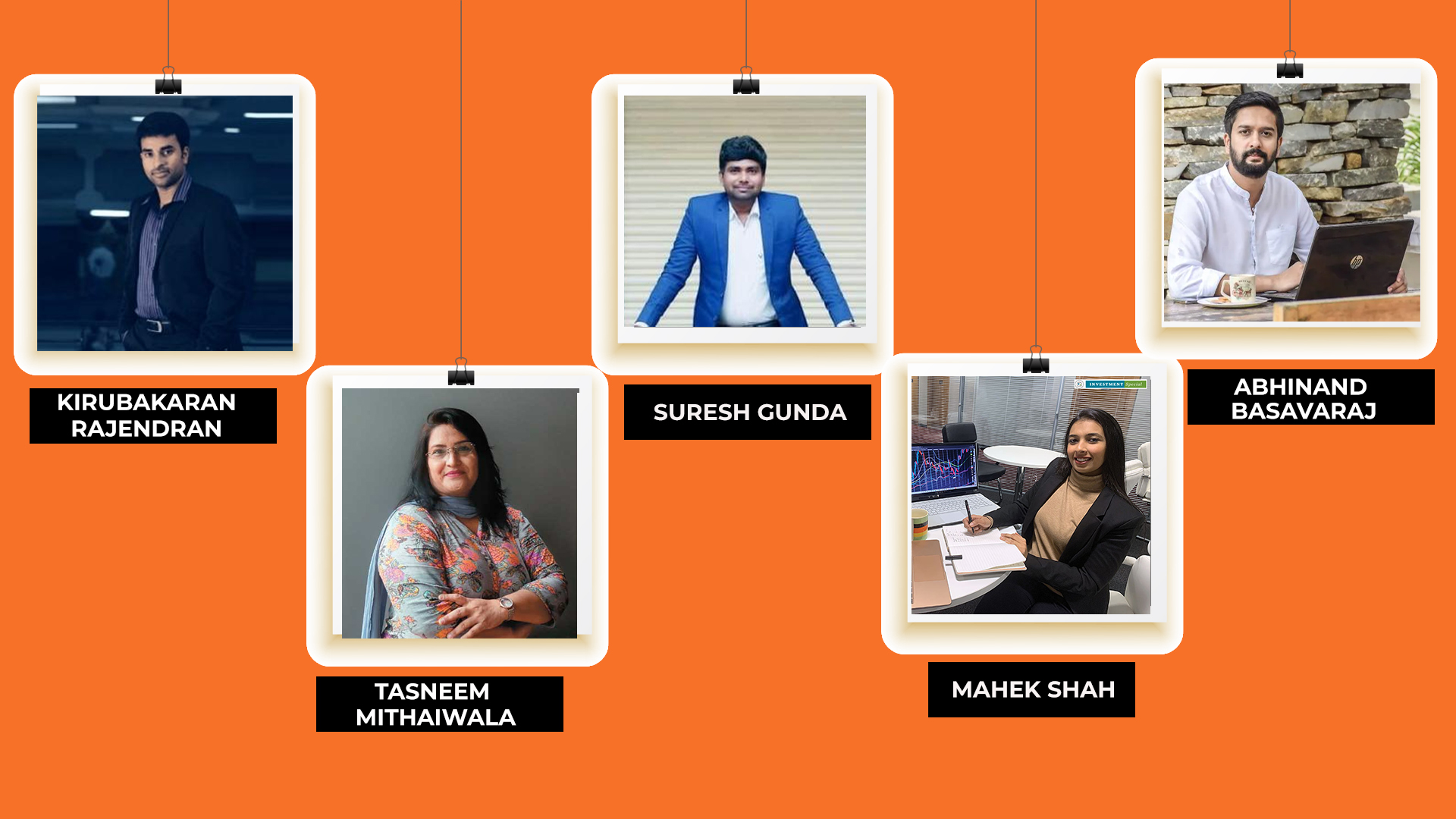 This list is fundamentally different from share market investors, as here we take a close look at some successful traders who are into intraday trading.

Here in this list, you will find those personalities that began with very low capital and practiced trading regularly and then turned to high volumes and diversification, once they were fully confident of their risk management strategies.

Hence for the lakhs of regular traders of India, this list is inspirational as well as insightful.

There are numerous part-time traders in India, who have a day job or work night shifts while focusing on their stock market career out of a passion for trading. But not many made a leap from mundane 8-9 hours job life to an exciting full-time stock market trader. Kirubakarn Rajendran is an exemplary exception.

A trained statistician turned engineer turned stock market entrepreneur, there’s so much he has achieved in his professional life, that even a book won’t suffice. Born and brought up in Chennai, in a middle-class family, Kirubakaran is also an MBA from Symbiosis University, Pune.

Today, Kirubakaran runs his own firm called “Square Off” under which Algo Trading services are offered to stock market traders. Being an Options trader with expertise in Algo Trading, Kirubakaran Rajendran is highly passionate about intraday trading and that was one of the key reasons behind the name “Square Off”.

In no time since its launch, Kirubakaran has managed to turn SquareOff.com into one of the top Algo Trading Services in India.

But Kirubakaran wasn’t always this successful. On the contrary, in 2008, he was only a part-time trader, utilizing off-work hours and relying mostly on TV news channels for stock selection. And then a time came when he lost huge savings in the market because of blindly following the stock news and making subsequent trading decisions.

It is no secret that most of the Indian Stock Market Traders give up once they face such losses in the market. But this was where Kirubakaran was different.

Instead of feeling disheartened, he planned to use his statistical knowledge on the Share Market. Soon, he found that he needs automated decision-making in stock trading so as to not lose out on ludicrous opportunities. And in no time, he found himself quitting his job and embarking on a journey of stock trading full time.

Kirubakaran found the journey tough initially, but with time he cultivated new abilities which, on implementation, ensured that he didn’t plunge into deep losses. One such acquired ability was the diversification of his stock profile. He discovered that a diverse approach helped him manage risks and increase the probability of making good profits on a daily basis.

In his own words, Kirubakaran is really happy that his mundane 8 hours job is a distant past and that he can manage his stock market startup while holidaying with friends, all year long. That really is an example of a “dream come true” story, especially among the Indian stock market trading community.

Necessity is the mother of invention, but in this case, Investment. Tasneem was unable to continue her job in corporate setups, because she had three other women to look after and care for. Her mother was bed-ridden and required constant care, while her two daughters were still growing up.

How does a single mother tackle this? Feel depressed, or blame the circumstances and then just give up. Or worst, fall for the societal pressure to look for a “suitable” groom and enter a marriage of coercion.

Tasneem Mithaiwala didn’t take any of the roads that were expected of her, on the contrary, she built her own path, which brought her to a milestone in the stock market world. Today, Tasneem is highly efficient at intraday technical analysis, not to mention, an influencer for a generation of women that dream of making it big as a stock market trader.

Tasneem started very steadily while learning the stock market on the go. She took professional classes and that really helped her to build confidence to trade in higher volumes. But Tasneem proudly proclaims that she isn’t somebody who follows bookish strategies, rather, she has developed several of her own.

And how did she do that?

By sheer practice and dedicated efforts, Tasneem has devised methodologies that she quickly shifts between taking into consideration the instantaneous market parameters such as volatility. She is a staunch believer of market analysis and strictly avoids so-called “intuition” in trading.

She has a simple mantra for every stock market beginner. This mantra is of perception. Tasneem recommends studying the market thoroughly before starting with serious trading. She believes that if one is eager for the understanding of stock market investments, then they shall find their own paths, just like her.

To choose a life out of the ordinary, is exciting as well as challenging. Suresh Gunda is a living testimony of just that.

Suresh Gunda is a college drop-out turned stock market trader and entrepreneur who has been successfully running his own startup known as Ankura Financial Services since he turned 22. Within a decade, Suresh Gunda has managed to turn this stock market advisory startup into a full-fledged enterprise, with a client base that has accelerated substantially.

But where did this advisory start-up idea come from? To answer that, it’s necessary to take a look at the trading experience of Suresh Gunda so far. In his late teens, Suresh opened his Demat account and started to trade on the basis of mediocre tips and research.

Soon Suresh found his assets spiraling out of his hands, he was edging close to zero balance as his strategies were highly inappropriate and loss-making.

Suresh Gunda took a momentary pause from trading and in this step-back phase he went back to books, this time only about the stock market. He felt the urge for learning and was quick to spot that knowledge of the stock market was a key difference between a casual trader and a serious trader.

But his knowledge didn’t just come from books. His most essential source of stock market wisdom came from the interactions he had over the years with some successful stock market traders of India.

With enough knowledge in hand, Suresh Gunda was able to formulate productive trading strategies that he deployed and the results left him ecstatic. And this is where he decided to share this expertise in a form of the advisory business. And here, Ankura Financial Services was born.

Suresh Gunda’s free advice to every budding trader is that when trading, keep a check on one’s emotional decision-making and rely more on technical knowledge that one can build over the years of practice in trading.

Mahek Shah started trading even before she hit her 20s. At such a tender age she was able to quantify the world of stock market trading and make substantial profits which she has utilized in pursuing a major in Investment Banking from a reputed university in Britain.

Was it all that easy and simple? How was she able to turn into a professional stock market trader when most of her peers were preoccupied with partying and occasional studying?

This only can mean that she had a vision of making it big in the Indian Stock Market and age was never going to be a barrier.

Not to mention, that her passion wasn’t taken seriously by anyone, the consensus being that this was just a little hobby and a way to utilize some pocket money. But Mehak Shah didn’t allow anything or anyone to distract her from her objectives in the stock market.

After completing her graduation, she turned into a full-time trader and was able to make handsome profits in intraday trading. And she has adapted a strong and focussed approach to trading while learning every day about the intricacies of volatile market behavior.

Such is her dedication that, even while pursuing her major in investment banking, she hasn’t given up on her trading practice and is ready to venture into the foreign market as well.

Mahek Shah is truly an unstoppable force with a bright future as a stock market trader in India and abroad.

It was in 2009 that the tech world was shaken by the revelations of the Satyam Computers Services scandal. Many were affected, including the traders who had been backing the Satyam stock for a long-time. But with the scandal coming into the limelight traders lost big sums of assets in the stock market.

Among these unfortunates was a 19-year-old budding trader, Abhinand Basavaraj. He was dead set on making profits but with the scam news out, the market fell profoundly, and he had no exit strategy in place and was doomed to lose quite an amount.

But such incidents define what Abhinand Basavarj is today. Because of his ability to learn from past mistakes, Abhinand Basvaraj has turned himself into a confident, risk managing, and efficient trader. He has cultivated a habit of analyzing his own market decisions, spotting all the shortcomings and working towards beating all.

Although having no background in trading is considered a weak point yet Abhinand Basvaraj has been, this young man from Mysore has completely shifted from trading in stocks to trading in options.

In accordance with his humble opinion, Abhinand believes that technical analysis of stocks and standard strategies don’t always work. Rather his emphasis is on the need to have certain reliable asset and risk management schemes always in place.

Personally, he refrains from trading with capital that goes beyond the risk management models. Even while indulging in intraday trading, Abhinand Basavaraj takes into consideration chart patterns and simply stays away from business news on television and relies heavily on his acquired understanding of the market volatility.

Abhinand Basavaraj is a benchmark for the Indian youth that isn’t so sure of the share market and are scared of losing hard-earned capital. If Basavaraj with no prior understanding of the market could make it big, well then anyone with conviction can do the same as well.

This list is testimony to the fact that dreams come true if you have the guts to go the extra mile. Stock market traders, although not applauded enough, are becoming social media influencers especially among the new age traders of the Indian stock market.

One common factor that can be noticed in all the above stories of the stock market traders is that they left their comfortable life and their protective zones, and started young in the stock market, faced ups and downs, and finally emerged as champions in their own regard.

These stories are here to encourage more and more Indians towards everyday trading as an option of respectable and flourishing able living.

Want to earn money in the stock market? Get started now by opening a demat account online for FREE! Get in touch with us and we will help you in choosing the right stockbroker. 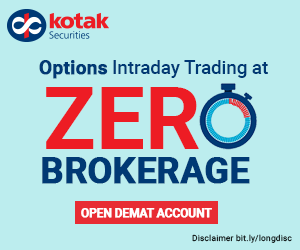