Stock split is a term that is widely used in the world of the share market. Are you aware of the concept? If yes, then you might be curious to know more. Of Course, then here we are with the example of stock split.

To understand the concept, let’s consider a stock split and MRF. It is true that in the Indian equity market, MRF is the most expensive stock in India. But why?

It is because it had never split its stocks. To get the reason behind that, let’s first understand what does stock split means?

So let’s begin with the Stock Split meaning.

What is a Stock Split?

Basically, the stock split is usually done to saturate the liquidity. This makes the shares more affordable for the traders or investors who were unable to buy the share before because of the higher prices.

The amount of shares increases when the company declares that the stock splits, but the market capitalization continues to be the same. Now, with the rise in the number of shares, the price of the per-share went down.

Note: In short, the stock split refers to the condition when the firm’s existing shares of the stock get divided into multiple new shares to enhance the liquidity of the stock.

Now, let’s understand the concept with the help of an assumption, and hence it will jump onto the main topic of the document, which is an example of a stock split.

Get delved into the following segments to have an example with the various parameters.

To understand the stock split example in India, let’s consider the most common high-valued stock MRF. You might often wonder why MRF share price is high. Right?

Well when it comes to the high price of the share like MRF then the major reason is that the company has never split its stock.

Over the years, the MRF shares have produced multi-folded returns for traders and investors.

MRF costs Rs. 54,488 for one share, which makes it the most expensive stock among the share market of India. Whereas the firms split the stocks on time to keep the liquidity, MRF never split the stock.

But what is the reason that MRF is not splitting the shares? Here, consider the following information to know the reason:

MRF needs the investors who are into the long-term investments so that it will become easier to maintain the decision-making power with the chosen board members.

The other stock split examples in India include the two more companies which are ITC and Bharti Airtel, whose stocks get split on September 21, 2005, and July 24, 2009, respectively.

Now, let’s talk about them separately.

The total trading volume of the company’s shares from April to September 2005 (before the stock split) was 1.04 lakh shares, compared to 24.89 lakh shares for the whole of the calendar year expired 2005.

To understand the concept, let’s understand it in simpler terms. When the stocks get split, it automatically raises the demand among the investors. The demand further enhanced the profit of the company.

After the basic understanding, let’s have a look at the data.

There are various firms that opt for the stock split strategy so that the investors can purchase the stocks easily.

Note: Whenever the stock price of the company raises to the extent the shares can be exchanged after the split for the one before the split.

➡️ Alphabet: Along with the effective tenure, i.e., 2014, Alphabet finished the 2-for-1 stock split. However, the freshly formed shares were non-voting, and that is why two Alphabet ticker symbols are now publicly traded.

➡️ Apple:  Tesla unveiled the 4-by-1 stock split with the effective date of 31 August 2020 and earning reports from the second quarter of 2020.

After understanding the concept of a stock split, now if you want to know about the upcoming stock split that are going to be launched in 2021, then consider the following table:

If you want to know about the upcoming stock splits that can help you in earning more profits, then here is the data available.

Note: The table which is mentioned above is reliable and it is taken from Money Control.

The measure that is taken by the firms to decrease the number of the more outstanding shares in the market is known as the reverse stock split.

Let’s understand a concept further with a situation.

If the reverse stock split ratio is 2:1, then it means that the investor or a trader will receive one share for every two present shares.

The reverse stock split in India’s list is mentioned in the below table that was seen in the year 2020.

The companies mentioned in the table above were the ones that went through the reverse stock split.

In India, for  2021, there are no reverse stock splits upcoming. 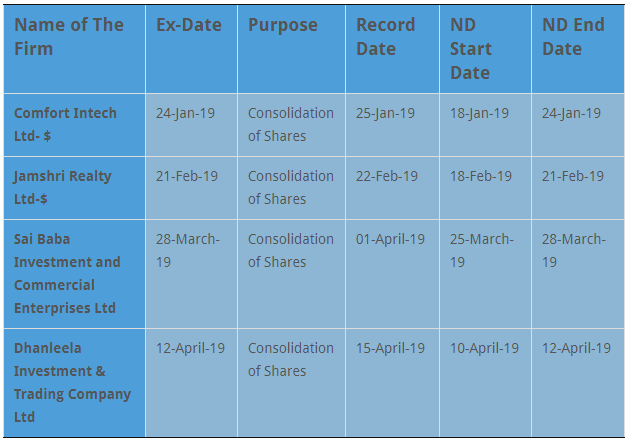 The companies mentioned above went through the reverse stock split in the year 2019.

Example of a Forward Stock Split

The general type of stock split is the forward split. A forward split means a company’s share count is raised by providing the new shares to the present investors.

To understand the concept, let’s assume an example of a forward stock split.

Swayam has a 3-for-1 forward split which means, if he possesses ten shares of Infosys company before it gets split, he will carry the 30 shares afterward whenever the split is done.

The number of shares you possess could be changed by the company’s decisions. Among those decisions, one is a forward stock split. There are a number of outstanding shares across each company and its owners.

The forward stock split can get added to the number of stocks an investor holds, but at the same time, the investment rate does not rise.

The investors with the stocks held along with them end up with more stocks without producing the additional investments whenever the company endows the stock split.

If one wants to know about the split ratios, then it is to be mentioned that 2-for-1 or 3-for-1 is the most common split ratio. This means that the stockholder will be having two or three shares for every share that was held before.

Let’s understand it with an example of stock split.

A 4-for-1 stock split indicates that for every existing share, three new ones will be formed, for that total of four just after split.

Apart from all these, the stock split ratios can quickly examine that whether an investor is watching for the forward or the reverse stock split.

When the firm provides a share of each outstanding share, at that point, the number gets doubled in the shares, which are known as a 2-for-1 stock split.

Since nothing has changed to raise the firm earnings, multiplying the number of shares seems to have the result of reducing the stock price while retaining the company’s value.

In a different instance, if a firm declares two shares for a 3-for-1 division, the worth of each share will indeed decrease to one-third to maintain the same value of the company.

A memo entry to acknowledge that even the amount of shares has modified and the par value per share has improved is really the only journal entry required for a stock split (if there is a par value of a stock).

Consequently, because the overall total sums for the par value and perhaps other elements of paid-in capital and stockholders’ equity don’t really vary with a stock split, a traditional journal entry (both with a debit and a credit) is indeed not necessary.

In short, a stock split does not require a journal entry. Rather, the organization creates a memo entry in its journal describing the stock split as well as indicating the current par value.

Just after stock split, the balance sheet would represent the new par value and also the new number of registered, released, and outstanding securities.

How to Calculate a Stock Split?

After grabbing the example of stock split, now if you want to know about ‘how to calculate a stock split,’ then this segment will help you in sorting all the queries.

Note: It is quite sensible to ignore the stocks with the recently experienced the reverse split. Until and unless you have the justification for trusting the firm with the strong plan for rotating itself around.

There is a faster method that will help in determining the shares that have been received by an investor in a split is to make the even two sides of the ratio.

Let’s understand the calculation of the forward stock split and the reverse stock split.

It will be better to understand the reverse stock split concept with an example. Let’s begin then!

In that situation, 600 will be divided with the 3 and the result will be 200 new shares.

Now, let’s assume a situation for the forward stock split.

Consequently, 600 will be multiplied with 4 and the result will be 2400 new shares.

Note: In the forward stock split the current number of owned shares is multiplied with the number of new shares that is going to be issued for each share.

Whereas in the reverse stock split, the current number of owned shares is divided with the number of shares that are going to be converted into the new share.

What Creates a Stock Split?

Now you might be thinking that the person can invest in the share so what creates a stock split? To sort this query, you can get the information in these particular segments.

To make this happen, sometimes the companies split their shares into multiple stocks which allows the investor to invest in them at a lower value.

There are the advantages of the stock split because of which the firm starts the process. The advantages are mentioned below: 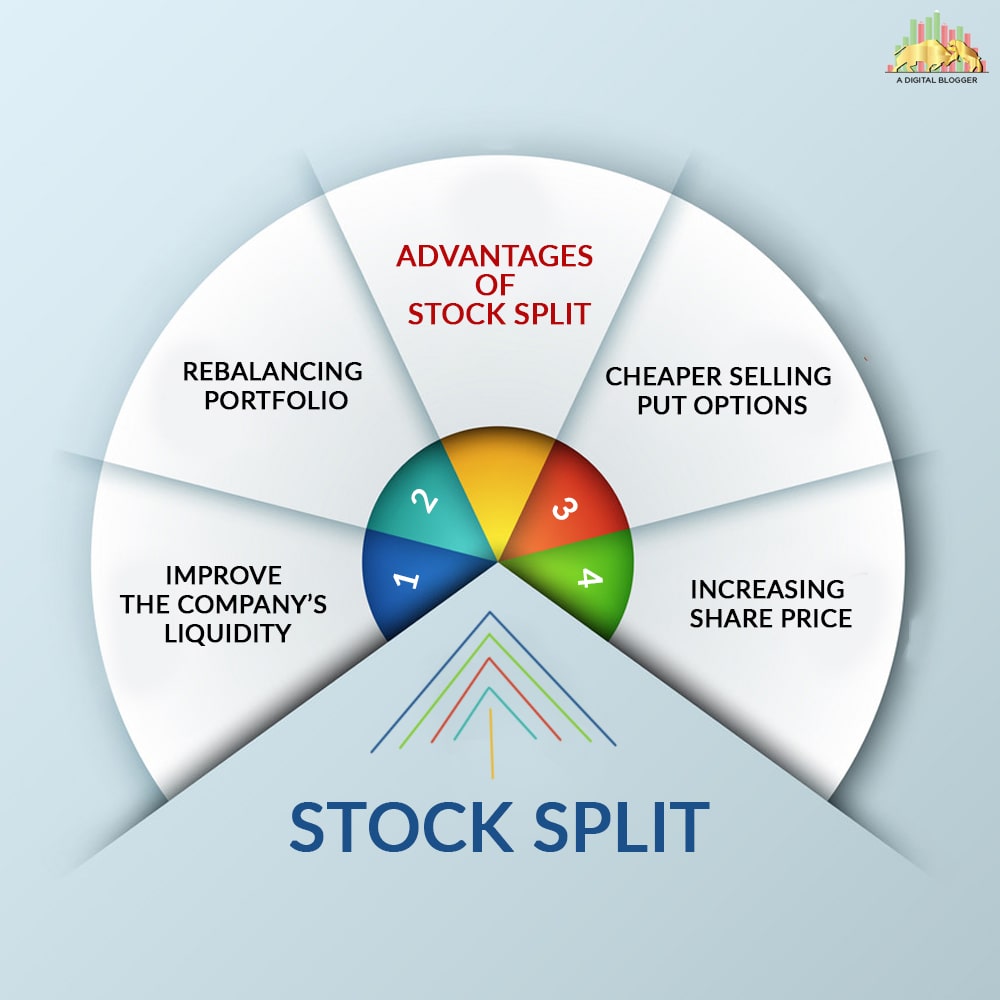 Whereas, if you check the negatives of the stock split, then it can be seen that it increases the volatility and it is not necessary for all share prices to get increased.

In the above informative piece, various parameters have been covered, like why the company split its stocks or why it does not? And there is no fierce proof that either concept endorses.

Moreover, for the stock splits, no regulatory guidelines have been introduced. The investors can invest in the stocks of the companies that have been split and mentioned in this piece.

It is upto the company to decide whether or not to split their stocks or not as the investors have the paths to approach the stocks even if they are trading at higher rates.

However, since reverse stock splits are just an accounting trick, you ought not to be worried as long as you’re investing in fundamentally sound firms.

It is important to learn the concept, research about it, and then take a firm decision.

Want to trade in the stock market? Refer to the form below and get all the guidance related to it: