IIFL is one of the leading financial services company in India. IIFL is doing business as IIFL Holdings Limited. IIFL founder is  Nirmal Jain and he founded the company in the year 1995.

IIFL is a financial conglomerate and provides a variety of different financial services through other companies within the group.

IIFL founder, Nirmal Jain is now the Chairman of the whole group. He founded the original company with the name of Probity Research and Services Private Limited which was engaged in the business of providing research services revolving around the Indian economy and various businesses.

The company was headquartered in Mumbai . IIFL branches are more than 200 in India like Delhi,  Chennai, Bangalore, Hyderabad, Kolkata.

The IIFL founder, Nirmal Jain is one of the billionaires of India and his net worth touched the mark of $1 billion in the year 2018 for the first time. This happened when IIFL Holdings grew by more than 100% in the last 12 months.

Nirmal Jain completed his graduation in Commerce from one of the most prestigious institutes of India, Narsee Monjee College of Commerce and Economics, which is a college that is recognized under the University of Mumbai.

The IIFL founder has gained education from one of the best institutes in the country. After completing his graduation, Nirmal Jain completed his PGDM degree from India’s top management institute, IIM Ahmedabad.

He has been certified as a chartered accountant from ICAI too.

IIFL Founder, Nirmal Jain first started working as a commodities trader with  Hindustan Unilever. This was in the year 1989. Six years later, in the year 1995, he founded his research company which became a huge giant, IIFL later.

After four years, Nirmal Jain created one of the first online trading websites in the year 2000. Starting from an IIFL trading website, the business of t

Currently, Nirmal Jain holds directly as well as indirectly, about 23% of the IIFL group. 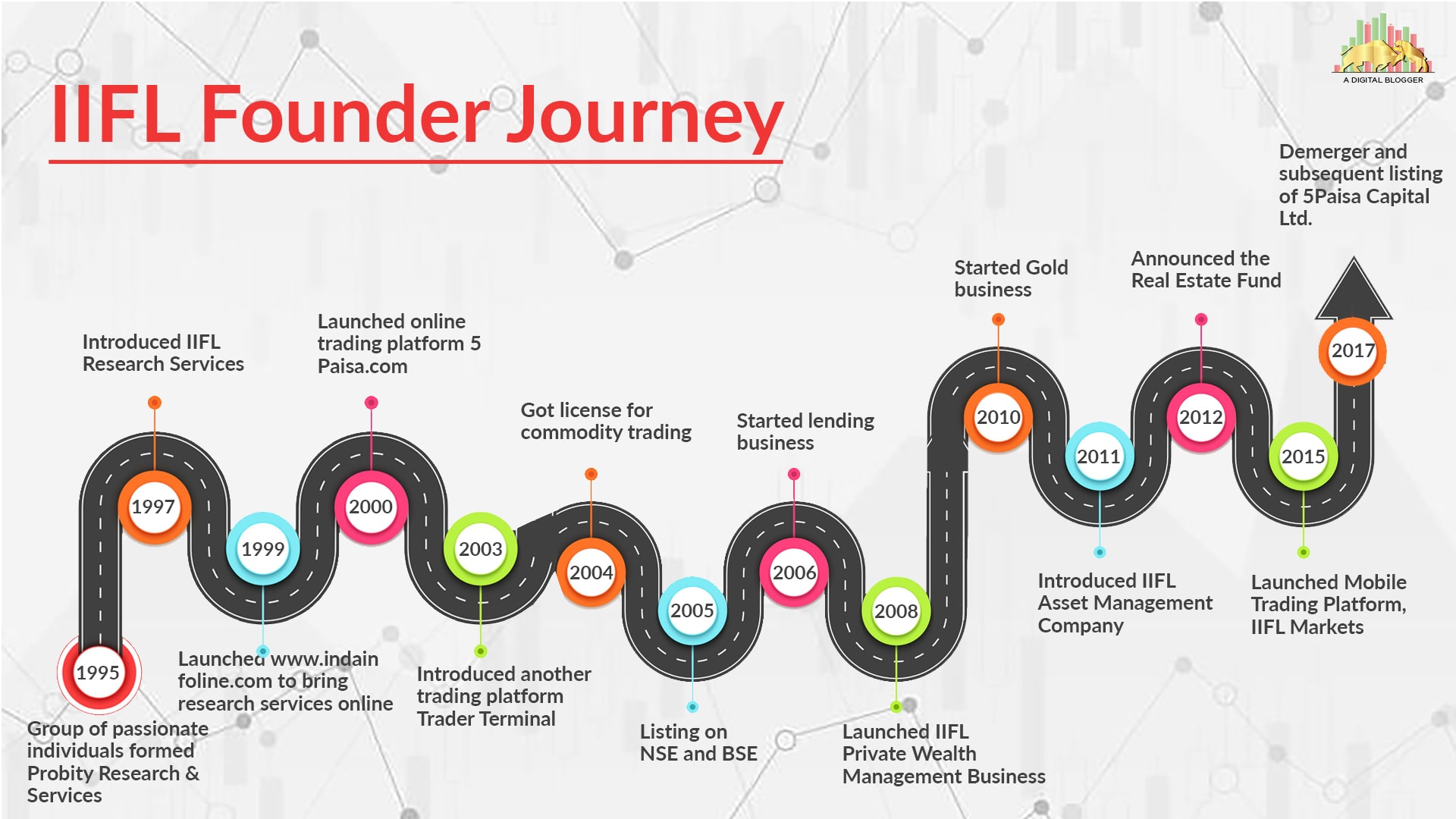 Nirmal Jain had the vision of producing the best quality research services on the economy of India comprising of all the businesses in different sectors for Probity Research and Services Pvt. Ltd. This was in the year 1995 – 1996.

This was received with much interest and enthusiasm by the top players in the Indian markets like the Tata group, HUL, Crisil, SBI, McKinsey, and even Citibank. It had happened in the year 1997.

The year 1999 was the year of the launch of India Infoline as www.indiainfoline.com with the aim of providing free IIFL research services through the internet. It was followed by the first funding in IIFL by CDC of up to $1 million.

The year 2000 was marked by the launch of the online trading platform 5paisa.com. After three years, IIFL launched the Trader Terminal which became very successful instantly.

Then, by the year 2004, they got their license for commodities trading and in the

IIFL Asset Management Company commenced its business in the year 2011 and this completed the wide range of services provided by the IIFL brand.

Since then, IIFL has launched many other services like services to assist in real estate planning, succession planning, etc. They have been growing on the technology front too with the launch of their mobile trading platform.

They have made some acquisitions in the past to give a boost to their existing businesses. They also raised funds through a fresh issue of equity.

Nirmal Jain, the Founder of IIFL has emerged as the new rich in the world’s fastest-growing economy.

With the continuous efforts towards offering great services, the IIFL holdings have doubled its wealth in the past 12 months with the net worth of $1 billion as per the Bloomberg Billionaire Index.

On the other hand, the IIFL Wealth was able to manage the high and ultra-high net worth of 10,000 each having potential assets of $3 million.

One of the most important parts of the IIFL group is its wealth management company, IIFL Wealth Management. This company was founded by Karan Bhagat.

He is working as the Managing Director of IIFL Investment Managers. He also has an additional role as the Chief Executive Officer of this company.

The co-founder of IIFL Wealth was Yatin Shah. He is currently working as the Executive Director of IIFL Wealth Management. He has experience of more than 16 years in the areas of research and private wealth management.

IIFL Gold loan services are one of the best services of the group. They commenced in the year 2010. It was founded by IIFL founder, Nirmal Jain. The gold loan services allow any individual to take loans against the gold ornaments he/she owns.

These services can be availed in a matter of a few minutes with the help of any IIFL gold loan branch. A person only needs an identity and address proof in order to get the approval for the loan. Cash would be provided to the person within 30 minutes.

Along with the IIFL founder, Nirmal Jain, the co-founder of the group was R. Venkataraman. He is the Managing Director of the group and co-promoter.

He was accredited as the Best CEO in the large corporate category. He was equally involved with Nirmal Jain in making an initially small company into a big conglomerate.

Venkataraman completed his graduation in engineering from IIT Kharagpur after which he pursued his management degree from IIM Bangalore.

IIFL Nirmal Jain founded a research company in the year 1995 after working as a commodities trader for 6 years. This company later diversified into many financial services and now caters to lakhs of customers operating through many subsidiaries spread all across the country.

He has excellent academic credentials and an innovative and intelligent mind.

The big diversification of his company providing a large number of products and services to the clients also show his great management skills.

Want to know more, feel free to contact us