What had happened on October 19, 1987, in the stock market that led to the economic crisis and deaths of many investors? Here you can get the complete detail of the Black Monday 1987 stock market crash that leads to a huge loss of securities invested by people around the world.

The stock market crash 1987 took place in October 1987 when there was the biggest one-day percentage drop in the history of the US stock market.

All this did not happen at once and the crash was eventually the result of the chain reaction of the market distress occurring at that time.

Get the complete description of the crash, facts, causes, and effects of the stock market crash 1987.

One of those unforgettable stock market crash took place in 1987 when there was the biggest drop of Dow by 22.6% in a single day. The crash was the biggest decline in trading in US history.

In 1987 the concept of the internet and globalization was new to the market and people as well. The new advancement in the world brought different countries of the world close together and interconnected them technologically.

In such an era of globalization and reducing distance among nations The Black Monday 1987 occurred due to the series of events that served to underscore the concept of globalization.

This does not mean that the crash not hit the market or had any ripple effects. In fact, the Black Monday crash 1987 resulted in huge losses and an economic crisis worldwide with a major decline of 20% in the days that followed the crash.

Black Monday 1987 Crash did not happen all of sudden. In fact, many warning signs were displayed before the day when the crashed took place.

Some of the highlighted facts of stock market crash 1987 are:

The storm hit the market in October when the federal government disclosed a larger-than-expected trade deficit and the fall in the dollar value. This decreased investor confidence that further led to the additional volatility in markets.

The market began to decline on October 14, 1987, when the Dow fall by 4% and 2.5% on another day. Later on October 16, the event is commonly known as “triple witching”: the monthly expiration of options and futures occurred on the same day.

With the event, by the end of the day, the Dow further falls by 4.6% leading to the devastating loss in the London Stock Market.

On October 19, the crash hit the Hong Kong market and soon spread throughout Asia, later to Europe and the US. With all the series of events in different parts of the world, the DJIA dropped by more than 500 points and S&P500 by more than 55 points.

Those occurrences shifted investors to the liquidate positions and the sell orders became outnumbered. This created a cascade of events in the stock market.

The stock market crash India of 1987 led to the fall of the New Zealand stock market by 60% while in the US the DJIA crashed at the opening and by the end of the day fell by 22.6% with 508 points.

It took two years for the Dow industries to recover and to reach back into the state as was in August 1987.

On analysis of Black Monday 1987 events, many regulators and economists came up with the primary reasons that contributed to the market crash.

A few years before 1987 many international investors actively participated in the US market that accounted for the rapid pre-crisis appreciation in stock prices. Along with this, the new investment firm “portfolio insurance” become popular that increased the use of options and derivatives.

This accelerated the crash’s pace as the loss during the initial phase led to the further rounds of selling. 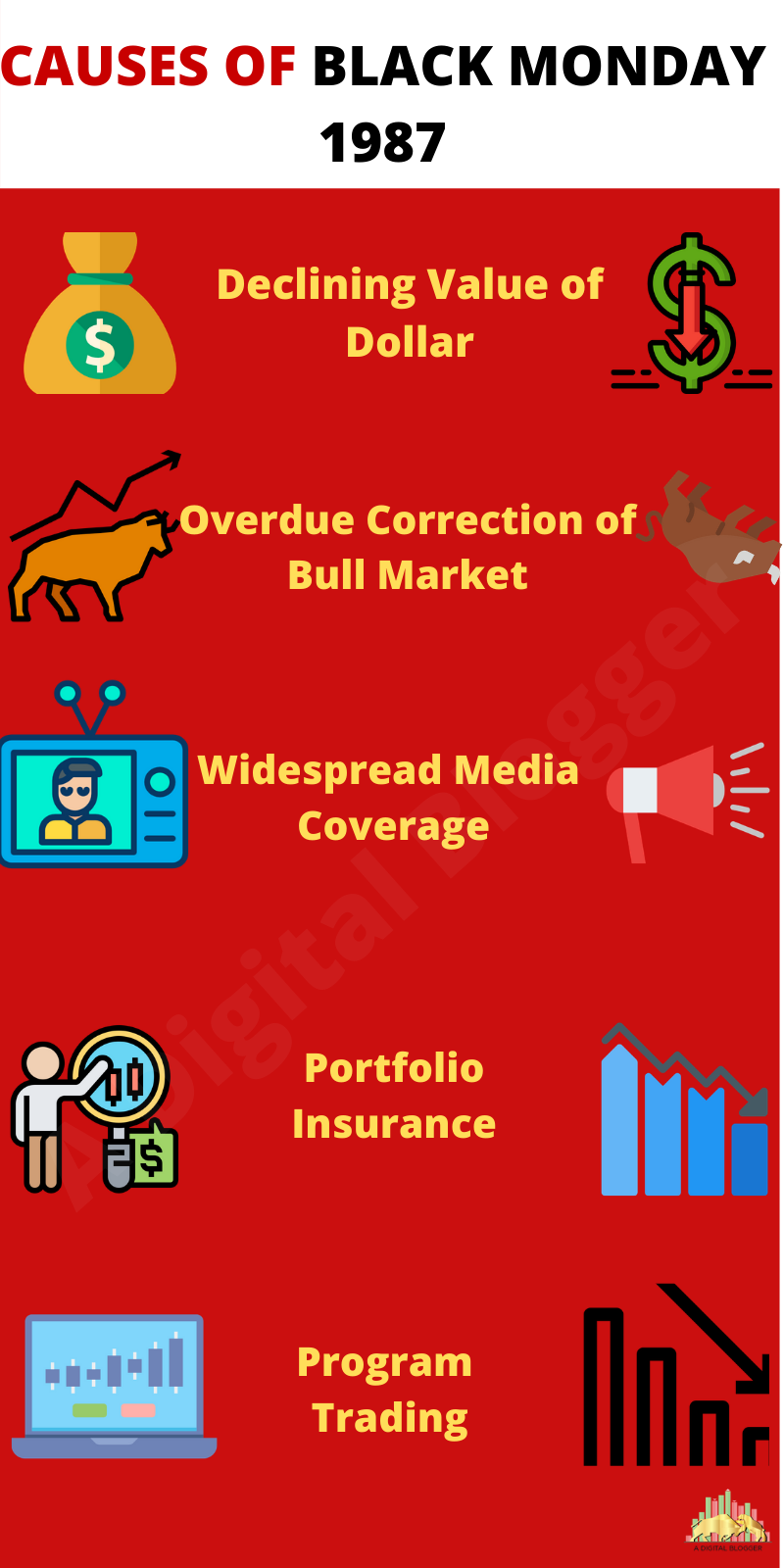 Some of the highlighted reasons for the Black Monday cause 1987 are enlisted below:

A few weeks before the stock market crash 1987 the federal government published a news about the widening trade deficit. This roiled the financial market and finally decreases the value of the U.S. dollar.

The weakening of the dollar eventually led to increased interest rates. The news soon spread and stormed the stock market that started unloading shares on October 16. This fall the Dow 4.6% and marked the initiation of the decline on Black Monday.

According to market analyst, it has been found that the Black Market crash 1987 was driven because of the overdue correction of a bull market History for a longer period. There was no major correction of prices in the fifth year of the bull market in 1987 that resulted in the market crash.

Also Read: Is the bull market good or bad?

Although the media cannot be blamed directly for the crash their active role with updated news of the stock market created panic among investors. At the time, the television entered the market and globalization was in its initial face.

This led people around the globe to view the stock market crash in real-time on the television.

As more and more investors came across the Black Monday they started selling the portfolio position at an accelerated rate.

As discussed above, portfolio insurance was also considered as the major cause of Black Monday. Portfolio insurance involved the trading of risky options and derivatives that eventually resulted in the market decline.

The continued trading of the risky stocks increased threat and affected the stability of the stock market regulators that eventually led to the implementation of “circuit-breakers”. With this, the trading in stock stopped and the exchange experienced extreme volatility and large losses.

In the program trading, the computers were programmed to trade large numbers of stocks automatically under any market condition.

Since many were not fully aware of this type of trading the big stock trade exploded the market. That worse the condition and made Black Monday more threatening.

Since the stock market crash 1987 affected almost every country of the world, its effects are seen all around with the worst consequences of increasing suicides by investors and the number of death.

In New Zealand, the effects of the October 1987 crash put the long term effect on the nation’s real economy thus contributing to the prolonged recession.

Many top businesses went out of business along with the impairment of New Zealand and Australia.

In the UK, the speed of the crash was observed at the accelerated rate. There the FTSE100 fall by 136 points  that brought the market down by 23%

The primary reason for Black Monday 1987 was the Program Trading. It stops all the activity in the stock market. Also, many investors who opted for mechanical trading were badly affected by the crash.

Although there were many reasons that led to the stock market crash 1987 the exact catalyst is still unknown. The crash in the market led to the implementation of circuit breakers and slow down other irregularities that gave more time to market to undergo corrections.