Head and shoulders pattern, as the name of this chart pattern suggests, is shaped like a head with two shoulders on either side. A regular pattern is a form of stock market prediction for a trend reversal from bullish to bearish. It may be either a reversal pattern or a continuous pattern.

The trend which precedes the head and shoulders pattern determines whether it will be a reversal or a continuation of the former trend.

The downward slope of the left shoulder depicts how prices gradually fall.

The subtle rise and fall of prices are followed by a more profound effort of the bulls towards a more surpassing upward trend in the prices. However, the bullish force does not last for long, another result, prices start retreating along the downward slope of the head.

The final trend pattern for the head and shoulder depiction is the right shoulder, which is a third attempt by the bulls to put the prices higher. However, in this case, the bulls fail to achieve a price peak as high as the one achieved in the preceding head pattern.

Finally, the bearish force appears to prevail in the market space, as the bulls are restrained achieving a higher or even an equal price speak.

As the prices fall back, the market is in a fluid state, indecisive about whether the bulls will gain power.

After the right shoulder is formed, we reach the neckline of the trend, which forms the starting point for a series in the opposite direction. This is a typical bearish form of the head and shoulder pattern which appears subsequent to an uptrend.

This leads to setting up a relatively complex head and shoulders pattern.

The top reversal head and shoulders pattern performs well in a bull market.

When one draws a line through the troughs is known as its neckline. 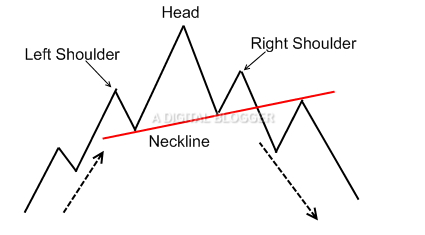 A horizontal neckline is least common and is visible when the prices of both troughs are even.

Most traders use the head and shoulders pattern measurement price target for the complete pattern. The estimated distance for the immediate price is available by traversing along the trend line after the point where the neckline is broken.

From this point onward, one has to go back and measure the vertical distance from the peak of the pattern head up to the neckline. Thereafter, the distance can be subtracted from the neckline at the point where the price is indicated after the completion of the full pattern. 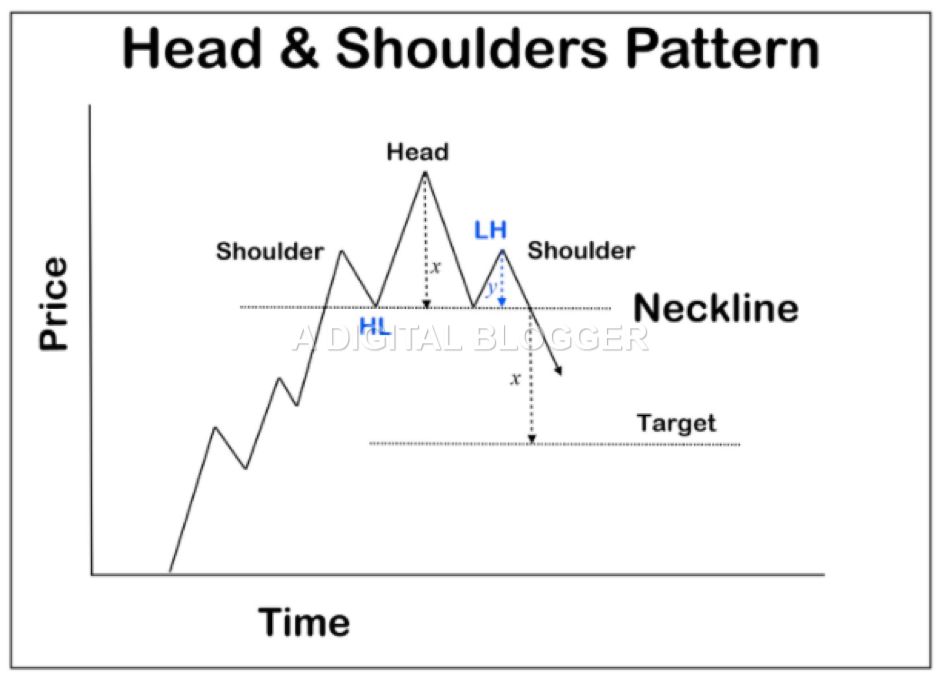 This estimate helps to understand the extent to which prices may decline when the top formation is completed.

Price target may be identified using the head and shoulders top pattern as well as the bottom pattern. To find the price target using the top pattern, the distance from the head to the neckline is measured to find out the spread amount. Later, the breakout point can be ascertained at the junction of the neckline on the right shoulder.

After this, the distance measured previously is again used to find out the upside price target level.

Prices that break into the neckline precisely dissipate the sell signal. However, the anticipation of the neckline does not suggest taking up trade owing to the risk of failure. A price target as high as the pattern is generally ideal for trading.

The height of the pattern refers to the difference between the high price of the highest peak and the lowest price of the two troughs. This difference must be subtracted from the breakout price.

Analysts suggest that an ideal head and shoulders Breakout download price could be calculated using the following formula:

The plausibility of the Head and shoulder pattern is guaranteed when certain features are characteristic to the pattern. A greater magnitude of price reversal is expected when the price increase preceding the pattern is larger.

The size of the price reversal increases when prices increase faster prior to the pattern. Stock traders may look for a higher left shoulder when compared to the right to ensure better performance of the securities. Lastly, upward sloping lines are an indication of good performance.

Let’s take a quick example to understand this concept of Head and shoulders pattern in real-life trading.

The bulls jump in with positive market news of strong quarterly results and take the stock price t0 305.30. Wow!

But then, bears pool-in via institutional investors and take the stock back to around 290.4.

Suddenly, by around 1 pm, a prominent investor of the country sees an opportunity and buys a huge chunk of SBI stocks. Seeing an increased push in the volume, other retail investors follow the buying pattern and take the stock price to 302.1.

This buying pattern continues for a while till around 2 pm when the stock price is at 308.5 and then suddenly, the market sees stocks being dumped, thereby, taking the stock back to around 295.2.

This goes on as a tug of war between the bulls and bears. The price push finally ends at the end of the day with the SBI stock closing at 290.60.

This is what happens in a Heat and shoulders pattern. Bears win at the end!

If you are looking to make money while using this pattern, you just need to take care of a few basic rules, always!

Here are those listed:

Place your trade and you are good to go and make profits using the head and shoulders pattern.

But prices may return back to the neckline when bulls start pushing them towards this direction.

Bears continue to compete and push prices to a point even lower than the previous low. After this where is bearish action, more buyers come into the picture in response to the newly lowered prices. As a last move by the bears, prices are plunged down even further, but they are unable to create a lower low.

Their unsuccessful attempt is a bullish sign, indicating the market dominance since the bears were unable to push prices down beyond the preceding low.

How to Carry Out Head and Shoulders Pattern Trading?

Similar to the characteristics of other candlestick patterns, the price is an important variable which shows when a trend is about to reverse. Sometimes, prices indicate a reversal, and at other times, they indicate the initiation of prices. In this context, the head and shoulders pattern illustrates the transition from a downward trending price line to an uptrend.

This pattern is prevalent in all markets and occurs irrespective of time frames.

However, fake patterns may appear at times and the best strategy is to set up a stop-loss order. In the reverse head and shoulders pattern, the closing of prices about the confirmation line is a signal to watch out for. An upward sloping confirmation line is a more powerful form of a signal as it indicates flat prices are achieving higher highs.

Learning to trade with the head and shoulders pattern can become considerably simpler through the use of volume analysis. To incorporate volume, you must find out the nature of the confirmation line.

When the confirmation line tends to incline towards the downside, you must look for a large amount of volume.

The head and shoulder pattern is a typical manifestation of multiple attempts to push prices either higher or lower depending on whether it is a regular pattern or an inverse one.

With this being said, we would like to wrap up this piece on the head and shoulders pattern. Hopefully, after reading this, you were able to add something to your trading armoury today.