The second candle is a precursor to the reversal of the market dynamics toward a bearish trend. This candlestick pattern derives its name from the analogy of a cloud hovering over a hillock. The pattern gives an impression of pessimistic market sentiment and must be analyzed well.

However, the bearish force takes control of the market later on and pushes the prices only lower. This shift in market control dynamics from the bulls to the bears is perceived as a sign of an impending bearish reversal.

At the opening of the market trend, an upward progression is observed with the price opening at its low and buyers willing to pay for the stock in an aggressive manner. The end of the session marks the close of the price and a bullish white candle is formed.

The price for the next day opens at about the previous day’s high end and this price variation is associated with the bullish candlestick. 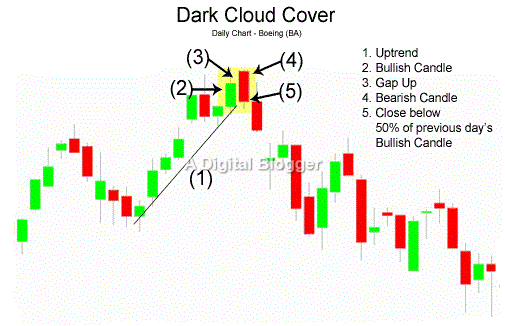 The next day or time period features new buyers placing confidence in purchasing stocks and financial instruments. Old buyers are also keen on investing further. The supply is observed to increase during this period as a decrease in momentum is observed, leading to a fall in prices.

Diminishing prices encourages the bulls to invest more, and the bears start selling at higher price levels. In this scenario, the supply level is far greater than the level of demand, and the prices are automatically pulled down.

New buyers face losses, and in order to regain position, they start selling their securities. The position of bears continues to increase, prices fall even more, and when the session ends, the prices close below their initial opening position.

The resulting scenario is a black candlestick belonging to a bearish trend. The validity of the dark cloud cover signal depends on how well the close of the succeeding candle matches with the body of the previous white candle.

Dark Cloud Cover Pattern – Shall You Use it?

The dark cloud cover pattern is indicative of a weakness in the uptrend.

Stock trading involves the exploration of certain features to evaluate the significance of a dark cloud cover pattern. The pattern is considered significant when the bodies of the previous up candle and the dark down candle are both long. A higher opening gap up by way of the dark cloud cover candle translates to a significant downward reversal trend.

A higher level of confidence is also placed in the dark cloud cover pattern formation when a high volume of trading occurs at the time when the candles are formed.

Control shift towards sellers is an important aspect of the dark cloud cover candlestick pattern.

According to analysts, the penetration of the close of the second day must be at least 50% into the body of the lighter candlestick. This percentage is a measure of the bearishness of the market space. When the opening for the second day is above the resistance area and a close is below it, then the pattern is considered more significant.

Traders holding a long position perceive the dark cloud cover pattern as a signal for taking action on the second day by recovering the long position below the low point of the succeeding dark candle.

Short trade positions below the low point of the succeeding dark candle may take advantage of the pattern by placing a buy under the stop order above the height of a pattern. This may result in losses, especially when the uptrend continues to rise.

Stock traders must also note that dark cloud cover candlestick patterns may be observed in an uptrend even when no reversal happens. In this case, it may be indicative of a minor profit booking.

Stock traders must be careful not to confuse a dark cloud cover pattern with the bearish engulfing pattern. Although the two candlestick patterns are similar in appearance, they translate into two completely different market scenarios.

When a second candle closes below the preceding day’s open point, a bearish engulfing pattern is expected as opposed to a dark cloud cover pattern. That said, looking for a few known characteristics such as the length of the candle and volume help attach greater significance to the nature of the pattern.

A good understanding of the overall placement and perception of the candlesticks helps trigger a prudent reaction in response to market sentiments and leads to positive decision making.